1. Preview and adjust location of the stamp on each exhibit

On the exhibits stamping tool, it is now possible to preview the first page of each exhibit and to place the stamp precisely on it.

To do this, click on the icon of the exhibit you wish to preview.

The first page of this exhibit will then appear on your screen with your stamp. You can drag and drop the stamp by selecting it with a long click.

Your files remain only on the device through which you use e-signum and are only transmitted to our servers once you click on the “Send” button. The files are then stored for the sole duration of the script execution, for a maximum of 10 minutes, until your stamped and numbered exhibits are downloaded. 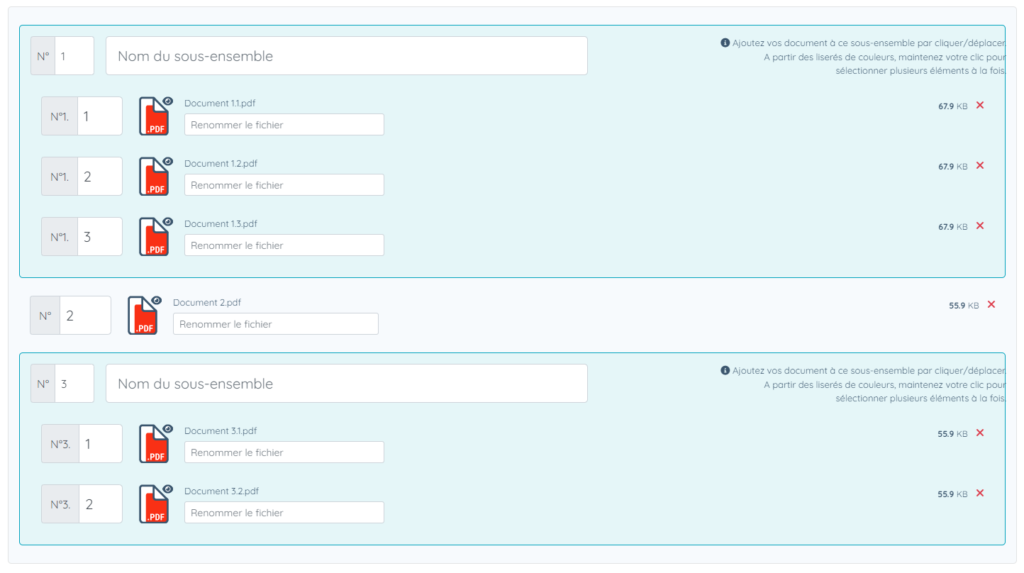 2. Stamping of the first page of each exhibit

In the additional options of the exhibits stamping tool, it is now possible, at the user’s option, to stamp only the first page of each exhibit.

3. Save your options as default settings

The options selected by default when launching the Part Stamping Tool can now be changed. To do this, once you have selected your preferred options on this tool, click on “Save the options”.

1. Optimization of the exhibits stamping tool

The following improvements have been made:

2. A new tutorial for stamping exhibits

This tutorial is automatically suggested to the first users of the exhibits stamping tool.

It remains accessible at any time by clicking on the link ? Help to use the tool.

A new tool is available via your account: “single file stamping”. It is a tool that allows you to stamp the different exhibits included in the same PDF file.

The numbering of the exhibits is automatic if they are identified by a bookmark, but it is also possible to manually indicate the position of each exhibit.

This tool is currently available for testing (beta test) and will be deployed in a final version soon. Please feel free to send us your comments in the meantime. 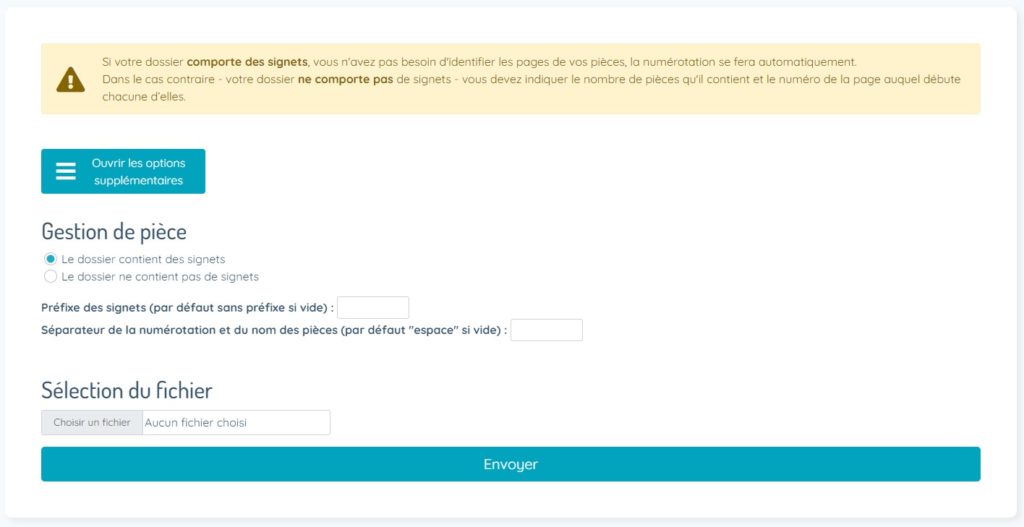 A stamp library is available by subscribing to the “Firm” licence (€19.90 excl. VAT/month of use). This licence comes with 2 free stamps and has the same advantages as the former premium offer (see below). The choice of the stamp to be applied is made in one click from the exhibits stamping tool.

It is possible to switch from one licence to another by accessing your profile under “Subscription Information“. Subscribers who have created several stamps before the update and who subscribe to the “Firm” licence will see all their creations kept and automatically available in their library.

The “magic button” allows to automatically sort the exhibits uploaded by the user by attaching them, if necessary, in the corresponding subgroups.

In order for the automatic sorting to work, the name of each uploaded file must include a number and then, separated from the “_” character (usually called underscore), the desired title for the exhibit.

Examples for exhibit no 1:

If the file is to be attached to a particular subgroup, it must include a double numbering: that of the subgroup and then, as a separator, the character “. (dot) or a “-” (dash), that of the part and, lastly, separated once again by the character “_”, the desired title for the exhibit, i.e. :

Examples for exhibit no 2.1:

In both cases, the numbering can, if the user wishes, be preceded by a prefix in letters and without special characters such as “PJ” (prefix whose use is requested by the Télérecours website documentation).

New options habe been added to the exhibits stamping tool:

The interface of the exhibits stamping tool has been improved:

The stamp creation tool has been improved with a new option allowing to choose the colour of the stamp and the text.

The design of the tool has also been modified to better guide the user through the stamp creation process.

In order to allow our team to be even more reactive and adapted to your needs:

When modifying the stamp, it is now possible to preview the changes before confirming them.

Further customisation features have also been added, such as the creation of rectangular and square stamps, as well as the ability to change the shape and thickness of the stamp outline.

In order to improve the visibility of our billing, payment is now made only after the months of use.

For subscribers who have already taken out a premium subscription at the date of this update, the scheme is being progressively implemented.

Thus, it will no longer be necessary to “advance” the amount of the premium subscription for the current month. Billing for the months of use of the application only will remain guaranteed, without any refund.

Pursuant to the provisions of Article R. 411-5 of the Code of Administrative Justice, in its redaction resulting from decree no. 2020-1245 of October 9, 2020, applicable as of January 1, 2021, users of Télérecours and Télérecours citoyens must transmit “each exhibit in a separate file, failing which [their] request will be inadmissible“. Each exhibit must bear “a title describing its contents in a sufficiently explicit manner” and “beginning with the serial number assigned to the exhibit it contains by the list of exhibits“. Télérecours users will therefore no longer be able to communicate their exhibits via a single file identifying each exhibit by a bookmark.

As a result, e-signum’s case file management tool has been updated. In accordance with the above-mentioned provisions, it now allows users to download each of the exhibits in a separate PDF file.

Merging of exhibits on option

Optionally, each user can always choose to merge all of their stamped exhibits into a single PDF file. A bookmark is then automatically placed on the first page of each exhibit, allowing quick reference to each exhibit via a digital summary.

This PDF file containing all the exhibits can be communicated to the judicial courts which, unlike administrative courts, do not require each document to be communicated in a separate file.

Improvement of the interface

In order to ensure an ever simpler access and use, the interface of the case file management tool has been improved.

Modification of the interface
The interface for merging exhibits/case file management was redesigned to make your work even easier. Multiple options have been grouped together in the same menu. The addition of subset(s) is made more readable. Lastly, a “help for use” was added to take full advantage of the application’s features.

It is now possible to make mass moves of files. A simple click/move authorizes this multiple selection. It is also possible to select several documents using Ctrl+Click, or to hold the click for a few seconds by delimiting a frame on the different exhibits.